If you have connections to shipping or financial support in Cape Town, South Africa, please contact Brenda directly at:

Hi  Kellie
Wow, Its Monday morning here, I am having an early start at work and can you imagine the me starting my week off like this, the surprise on my face when I saw your mail.  I did not expect this at all, this is unreal I need to pinch myself. Thank you so very much for the kindness you have shown, it just brings tears to my eyes right now. I still can’t believe that this is happening. My hope has been restored.

I am sorry that I haven’t kept in touch with you, but a lot has happened since our last communique, COVID has not being very kind to my broader family here in SA. For the whole of last year we have come off unscathed by this pandemic but from the January to date I have lost a cousin in Cape Town and a cousin and his wife in Johannesburg due to COVID.  I wish it will all just end already. I hope that you, your family and colleagues are all doing well on that side of the world. We are entering our Autumn season now, it’s starting to get nippy in the mornings and evenings, Winter just seems to come earlier every year and lasts longer than usual. Our seasons have changed dramatically, at times we can experience all four seasons in a few days sometimes even in a day. Life certainly has changed and so has people but our God is still in control and on the throne. What you are doing to make a difference warms my heart. I have read all the stories on your web page and it just blows my mind. I want to be part of this movement to make a difference.

Anyway on a lighter note. I have made another bed for a colleague of mine.  She told me that her dog sleeps outside in a shed, so I decided to make her a bed and the response was heart warming.  (see picture above with translation)
Brenda

Hi,
My name is Brenda Isaacs, 55 years of age and I live in Cape Town, South Africa, I watched your video on YouTube with regards to the elevated beds that you make and I have been inspired to start a similar project to make beds to sell to boost our income as I am currently the only breadwinner at home, my husband lost his job during lockdown, and at the same time I would also like to donate to people who cannot afford to purchase a kennel. I have seen many dogs lay on cold cement and when I saw the video I knew this would at least get them off the cold ground.

I was so excited that I went out today to purchase my pipes and cloth to trial and use as a sample. I have attached  a picture of my unfinished attempt using old pipes which I had laying around. What I am inquiring about is the corner pieces that you use for the beds, I have searched suppliers of PVC piping but they don’t seem to stock that particular corner piece in your video here in South Africa. I would like to know, if it is at all possible for you to assist me or alternatively direct me to a store that could perhaps give me a quote on the corner pieces and the screws to courier to me. The second photo attached is the connectors I used to put the frame together, instead of having to purchase only 4 connectors I’ve had to purchase 8 just to make the frame which is not cost effective.  Your assistance in this regard will be greatly appreciated. 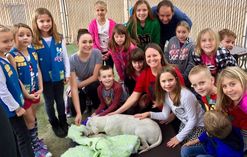 100 beds were delivered to shelter dogs on Sunday. (Source: KPHO/KTVK)
The dogs and the volunteers both benefit from this act of kindness. (Source: KPHO/KTVK)
Dogs at Maricopa County Animal Care and Control have warm beds to sleep in thanks to the hard work of a group of dedicated volunteers.
"I've been here many times, I foster a few, and I know they need beds, it's freezing out at this time," said Jill Smyros with Step Up USA said.
She said the group of people from Gilbert made the elevated beds themselves.  "This was my favorite event of the whole year. All the kids, all the parents, we had so many people. We almost had to turn them away, but we didn't," Smyros said.  They delivered the 100 beds to some grateful pups on Sunday.
"Huge impact, as soon as you put that dog bed in, the dog jumped in. It was awesome," Smyros said.  "They're perfect for our kennels because we can sterilize them. They're heavy-duty. They last a while," Melissa Gable with Maricopa County Animal Care and Control said.
At no cost to the county, Gable said they can't say "thank you" enough.  "We actually cannot go out and solicit for donations so the fact that these people contacted us and tell us this is something we want to do really helped us out," Gable said.
The dogs and the volunteers both benefit from this act of kindness, Smyros said.  "I want to get the littles involved to make sure they know how to give back starting at a young age, so they love it and get used to it as they get older," Smyros said.
​More Pictures below.

Paul Kattner of Hazle Township stands with two raised pet beds he has made and will donate to area animal shelters. Kattner is hoping others will help with his "Beds 4 Paws" project.  Through the Hazle Township man's "Beds 4 Paws" project, homeless animals won't have to sleep on
cold, concrete floors."The way I see it, animals don't have anyone to talk to. They didn't ask to be born, and they didn't ask to be dropped off on the side of the road," Kattner said of the reason behind helping the homeless canines.
The bed frames are made from lengths of pipe on which Kattner affixes heavy, washable canvas.The beds are elevated, Kattner said, so "dogs won't have to sleep on the cold floor in the winter or on the hot floor in the summer."The Animal Resource Center near Bloomsburg already uses off-the-ground beds and is welcoming Kattner's donations. He also dropped off a trial bed to the Hazleton Animal Shelter.

An animal lover, Kattner found plans for the beds on a website for the Columbus Dog Connection, a group of dog enthusiasts in Ohio who rescue all breeds of canines. He contacted the group and learned that members had built and donated numerous beds to shelters across Ohio.He figured he could do the same locally, and shelter officials were receptive to the plans. He's making small, medium and large beds, and is hoping members of the community will assist him.  For information on how to help, email him at beds4paws@ptd.net.Hazleton resident John Medashefski will help with the next round of beds, and Kattner has received support from Hajoca Corp., Hazleton Area Landlord Organization , Cedar Street Supply, Tractor Supply Co., attorney Donald Karpowich and George Hayden Inc. Those who donate will have their names added to the beds with white chalk, he said.He also invited other regional animal shelter representatives to contact him if they want to learn how to build the beds for dogs - or even cats."I can't make beds for every shelter, but I can show volunteers how to make them," he said.Kattner said he has a deep love of animals - something he believes was instilled in him when he was growing up.His dog, Snowball, was adopted from a shelter, and Kattner encourages others to consider adopting shelter animals.
jwhalen@standardspeaker.com     Standardspeaker.com/news/hazle-man-creates-beds-for-shelter-dogs-1.1269279#ixzz1m173CHwT

​I thought that you might like to see the dog beds that we built for the local animal shelter.  Since we have built these we have had requests for other rescues and shelters for beds and we would like to build more but we will need more material.  So we would like to built 20 more beds.  Home Depot donated the PVC so all we had to pay for was the corner pieces. These are just some of the beds....this picture is going into our local paper and we are going to present this idea to council for other Girl Scout troops to do.
Thanks!
Vicki Reiter
I wanted to get back with you to let you know that we will not be needing anymore awning material to make more dog beds because we have found plenty of companies willing to donate here in Cincinnati...Queen City Awning just gave us a complete 50 yard roll of brand new material because it was discontinued...in fact I cannot get to all the places that are willing to donate material.